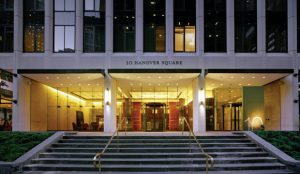 Colorado apartment operator UDR Inc. said Friday it has closed on its $260.8 million purchase of a 493-unit apartment tower in Manhattan, its first foray into the market there.

The deal by the Highlands Ranch-based landlord (NYSE: UDR) is for 10 Hanover Square, a 23-story complex between Water and Pearls streets in Manhattan’s Financial District that formerly housed Goldman Sachs. The Witkoff Group is the seller.

“The expansion of our portfolio into Manhattan reflects our desire to own and operate apartment homes in markets that have the best growth prospects based on favorable job formation and low home affordability,” UDR President and CEO Tom Toomey said in a statement when the purchase was announced a month ago.

“With total revenue per home of $3,000 per month and only six years following the completion of a major redevelopment, the acquisition of 10 Hanover Square will further enhance the overall quality of our portfolio,” Toomey said.

The tower previously was office space for financial firms Goldman Sachs and Kidder Peabody before being converted into one- to three-bedroom apartments in 2005. It features an on-site fitness complex, rooftop sundeck, retail and restaurants.

UDR said it is assuming an existing $192 million mortgage and pay $4.5 million in cash, and financed the rest of the purchase price by issuing $64.3 million in operating partnership units (a form of equity) with a floor price of $25 per unit.

UDR currently is the nation’s third-largest publicly traded apartment operator. Denver-based Apartment Investment and Management Co. (Aimco) is No. 4, according to the National Multi Housing Council.