Redbarre Media and Technology just announced the development of a $750 million venture in Parker, 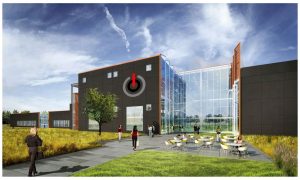 Denver CBS News correspondent Shaun Boyd reports, “We are talking about a 70-acre campus. Governor Hickenlooper says this will be the most advanced digital media and technology facility in the country, and could not only put Colorado back on the movie-making map, but draw TV producers and video game makers to the state, creating an estimated 4,000-plus jobs.”

Sited to break ground just south of E-470 near South Chambers Road, it’s aiming to be the most advanced, high-tech campus in the world. The project is the brainchild of Redbarre CEO Don Levy, who was instrumental in the launch of ESPN in 1979, and the advance of NBC Networks from last place to #1. His client list includes HBO and MTV, in addition to brands from Coca-Cola to Chrysler, and luminaries like Woody Allen, Martin Scorsese, and The Who.

Scheduled to open in 2020, Hickenlooper said the state’s technology and telecom sectors – which are ranked among the top five in the country – are also a huge draw, in addition to the area’s thriving arts scene.

The Parker School of the Performing Arts is located here, and is the largest performing arts school in all of Denver. Now serving K-8, the school is unlike any other in the Douglas County School District, providing a unique mix of academic rigor, along with training in the performing arts.

As a Parker resident for over 10 years, and having lived in Douglas County since 1998, I always had a gut feeling about what is now starting to take shape – the metropolitanization of Douglas county with new light rail stops and tracks, major companies relocating here, and now a movie production studio in my neck of the woods!

It will bring a great new energy, restaurants, diversity, and overall boost to the economy of Parker which will have many positive effects. This is another great reason for people to move to Douglas county, and will undoubtedly keep property values strong for years to come.

Interested in learning more about current offerings, and the Parker, Colorado lifestyle? Contact me at 303-803-0258 or visit rightnowrealestate.com, for more information. I’ll provide you with a comprehensive market analysis, and inside scoop on the most exclusive luxury listings in Douglas County, the Denver Metro area, and beyond.

Delroy Gill is a top producing agent at LIV Sotheby’s International Realty, the leader in Colorado luxury real estate. Born and raised in London, England Delory is no stranger to complex transactions and international relocation, bringing world-class service and out-of-the-box thinking to every detail of your real estate transaction. With a proven track record of multi-million dollar sales in Denver’s top neighborhoods, nobody works harder to sell your home for the highest possible price in the least amount of time, or find the next best property to perfectly suit your lifestyle.