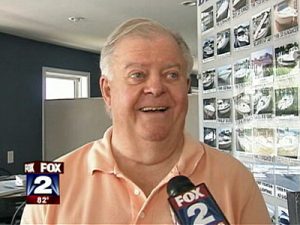 Bill McMachen told Fox News 2 this is his first foray into the real estate business. He plunked down $4.8 million for the lot of homes, which averages out to just over $7,000 apiece. As far as his future plans, he says he’s shooting to make back $2 million by flipping some homes and donating others to needy families.

Like the some 300 consumers (and other, less well-heeled investors, to be sure) who were elbowed out by McMachen’s bid, potential homeowners are quickly finding themselves fighting losing battles against money-slinging investors.

“If we knew it was going to happen like this, we wouldn’t even have spent any time,” an anonymous investor who was beat out by McMachen’s bid told Fox. “They could’ve made more money, I mean triple the money they made.”