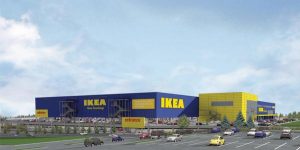 I am a big fan of Ikea being from the UK. It was the norm to go 10 minutes down the street to Purley Way and be able to buy an affordable living room, bedroom or an entire kitchen in a matter of minutes with great contemporary styles for a great price.

Although many do not rate the quality of Ikea’s products they all say its priced well and has a good enough life span that makes it worth it. The lifestyles we live today which is basically “out with the old and in with the new” every 5 years or so compared to our Grandparents who would keep furniture for 30-40 years and it would last 30-40 years before breaking down has gone!

So the big question is what about American Furniture Warehouse (AFW). Do you think they will shut some stores down or all stores? or try to change there more traditional styles to compete? AFW has been the “Heavy Weight Champion” in Denver’s furniture market for over 15 years now, but has this been by default? There really has not been any alternative options for Coloradans to buy affordable contemporary furniture so this battle will begin! I cant wait to see who wins this.

I do know that there will always be a market for AFW in Denver, its mid-west roots of tradition reflects its style and furniture. My love runs deep for Ikea, I once drove to California just to get a truck full of items, but the beach helped to 🙂

Let me know your comments and thoughts on the opening, or if you have shopped at Ikea what state? and what  do you think about the quality and price? and the IKEA VS AFW who will win?

A year after breaking ground on its 415,000-square-foot store in Centennial, Sweden’s IKEA home furnishing company announced that the store will open earlier than planned.

“It was a light winter, which allowed the construction team to work hard and long,” said Roth. “Everything went really quickly – good weather, a good construction team” and local officials who helped speed the permitting process.

IKEA, which identifies itself as the “world’s leading home furnishing retailer,” was founded in 1943 in the rural Swedish town of Almhult by Ingvar Kamprad.