This is directly across from my office I watch the swarm of police at the mall and thought to myself what is going on. Some nut case tried to blow up the mall, I am posting a pictyure of him just in case you can help because we need to keep the people of Littleton safe and I need to buy Lunch at the mall. 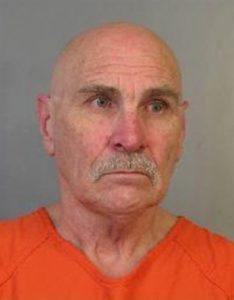 LITTLETON | The man authorities say they suspect of carrying out an apparent attempted bombing at a Colorado shopping mall had been released from prison a week earlier.

The FBI said Sunday that agents are looking for Earl Albert Moore after Wednesday’s fire at Southwest Plaza Mall, about two miles from Columbine High School, where 13 people were killed 12 years ago.

Federal Bureau of Prisons records show that Moore, 65, was released from prison April 13.

A judge sentenced Moore to between 15 and 19 years in prison, but a federal appeals court in 2006 ruled his stiff sentence was “unreasonable” and Moore’s sentence was reduced to seven years.

Authorities said they discovered a pipe bomb and two propane tanks in a hallway of the mall’s food court after firefighters responded to a fire. The explosives, which did not detonate, were found after the fire in the hallway prompted an evacuation of the mall. No one was injured.

Moore has an extensive criminal record and should be considered dangerous, federal officials said.

Colorado Bureau of Investigation records shows several arrests for possession of dangerous drugs, theft, and possession of burglary tools dating to 1984. Court records show that an arrest warrant had been issued for Moore in September 2004, six months before the West Virginia bank robbery, for his failure to appear at a court hearing related to a burglary case.

Moore has used at least seven aliases that include variations of the names Earl Albert Buchannan, Donald Charles Morelli and Gary Steele, according to state arrest records.

Moore lived in Colorado at least part time from the mid-1980s to 2004, according to public records.

James Wicks, a former son-in-law living in Denver, said he was previously married to Moore’s stepdaughter, Rebecca Duncan Wicks, who has since moved out of state. He declined to provide additional details when The Associated Press reached him at his home Sunday evening.

No one answered the door at Moore’s last known address in south Denver, and neighbors said a young couple now lives there.

“If I would have recognized him on TV I would have called police,” said Bill Newcomb, a tenant at the apartment complex where Moore once lived.

“It freaks me out,” said Joy DeBoer, who recently moved into the complex with her husband, Jordan DeBoer. “Just knowing that he knows where this is and knowing that this is a place he would be familiar with — it’s scary for me.”

Investigators have exhausted all leads locally and have put out an alert to every FBI office the country, FBI spokesman Dave Joly said.

“Last time we knew where he was locally was around noon Wednesday at the mall,” he said, referring to the previously released surveillance photos showing a man believed to be Moore in a hallway accessible only to employees and the suspect carrying a plastic shopping bag while riding an escalator. Other photos show a man believed to be Moore riding a public bus leaving the mall the night before the fire.

Moore is described as being between 6 feet and 6 feet, 2 inches tall and weighing about 200 to 225 pounds. He’s bald with blue eyes and a grey mustache and has a tattoo of a Viking on each of his arms.