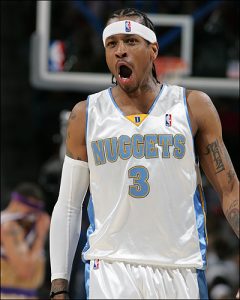 Allen Iverson, a former NBA star, an 11-time All-Star has enriched the luxury foreclosure statistics. He stopped paying the mortgage on his 6,848-square-foot house in Cherry Hills, Colorado, according to the Denver Post.
Iverson bought the property 3 years ago for $3.88 million.

Now he owes to his lender Wells Fargo more than $2.5 million on his six-bedroom, nine-bathroom home, the Denver Post reported citing a Notice of Election and Demand for Sale filed in Colorado’s Arapahoe County.
The house was for sale and scheduled to close for about the asking price of $2.85 million. The sale is allowed to continue, but when the deal is sealed, Iverson will be forced to pay attorney fees, foreclosure costs and default interest.
Iverson won the 2000-2001 NBA MVP award and played for four NBA teams during his 14 year career. He played for the Denver Nuggets in 2006 to 2008. In October he agreed to a two.year, $4 million contract with the Turkish basketball club Besiktas.

He should have called Delroy Gill